[UPDATE 04/2018. Originally published in 09/2016, this post is not that bad considering how many things I got wrong. Still, I stand by the recommendations for exercises  (but the reasons have nothing to do with those I gave back then). Please remember that at that time, I was barely able to walk or wipe my own ass, and it probably affected my judgment.]

Most lifters I know don’t practice yoga or use a handful of yoga poses as a substitute for static stretching. Most likely, because it’s slightly less boring (and looks cooler). This reflects how yoga instructors push “yoga for lifters”, aka mobility work.

But in fact, yoga-as-mobility is unnecessarily time-consuming for lifters. Adding half an hour of yoga practice from time to time may not seem much, but that does not take into account the learning curve of yoga. As far as mobility is concerned, lifters are better off with less time-consuming options.

However, there are excellent reasons for a lifter to incorporate yoga into their training. These reasons extend to any athlete using barbell work for strength and conditioning purposes. But they are slightly different from the reasons yoga is usually claimed to be beneficial.

What are those reasons? Well, let’s start with what they are not.

Benefits of yoga: A Skeptic’s Guide

The benefits often claimed for yoga are better alignment and posture, gains in strength and range of motion, and a better join and tendon health. For casual gym-goers — those who can’t tell a squat from a half-squat, mostly use machines, and think that brightly-colored dumbbells are free weights — these benefits are very, very real.

But when it comes to experienced strength athletes, even recreational ones, the case for yoga is much less clear-cut:

(1) and (2) are not in the least controversial. Yoga asanas have a somewhat steep learning curve. Paused lifts with a high range of motion (squats, front squats, overhead squats, etc.) have a near-flat one if you are already lifting. Plus, adding weight can help accessing the desired range of motion.

(3) and (4) would need a longer argument, and I’ll give one some day. Readers familiar with Pavel Tsatsouline’s Relax into Stretch and Super Joints will guess where I’m heading: mobility is a skill, and joint health, its side benefits. One can practice the skill with bodyweight, or load. And if you are a lifter, you’d better practice with a load.

(It’s not necessarily a hard skill. A client once told me that she had serious mobility issues, and could not press overhead, or squat below parallel. After one hour at the gym, and the right cues, she nailed a strict Klokov press and an ass-to-grass back squat.)

Summing up, mobility, flexibility, and strength benefits of yoga are at best marginal if you are already lifting and pay proper attention to exercise selection. When it comes to mobility and stability for lifters, lifting beats yoga on every count.

Enters the spine (and back pain)

Playing the odds, if you squat or deadlift moderately heavy weights (between 70% and 80% of your 1RM) with some frequency and/or volume, you have, do, or will experience lower back pain. And in fact, if you browse the internet looking for “lower back pain” and “lifting”, chances are that you will find routines with stretches and yoga poses mixed together. And that’s a very reasonable proposition.

Barring genuine injuries, lifters’ lower back pain is caused by the stabilizing muscles around the spine trying too hard to do their job. This causes ‘stiffness’ (residual muscle tone, on top of what is actually needed to keep you upright) which leads to fatigue, discomfort, poor posture (when not lifting) and eventually, pain.

[UPDATE (04/2018) The scare quotes around stiffness differentiate it from another sense of stiffness (defined by biomechanics) which is a good thing. For some reason, I dropped them afterward. Maybe I did not know what I was talking about at the time. I’ve added them back.]

Lower back ‘stiffness’ can result from incorrect technique, excessive volume and/or load, muscular imbalances, and whatnot. Actual causes are pretty much irrelevant, when it comes to yoga, because yoga not only relieves the symptoms but also addresses almost all the causes.

So it is about stretching, after all?

I’m almost hearing some of my readers thinking: “But, you cannot stretch a muscle, can you?” Well, if you’re one of them, you are right. And if you are not, get a copy of Tsatsouline’s Relax into Stretch or read some rip-off of the original.

To keep things short, what you can do is shut down the stretch reflex of a muscle, by contracting its antagonist(s).  And in fact, that’s how the “stretching” effect of yoga poses happens at the same time as its “strengthening” effect—at least for poses that are not just one big whole-body isometric contraction (and here’s for another one).

[UPDATE (04/2018) It looks like my former self had been swallowing some half-baked PNF propaganda hook, line and sinker. To be clear, that’s how proponents of PNF explain the apparent success of the method, but the mechanism behind its effect is not known. I’ve done my homework since and I’ll revisit this point. Fortunately, it is of no bearing for the rest of the argument.]

As far as yoga isometrics for spinal release are concerned, the learning curve is a non-issue. If you follow the link from the previous section (that one, if you’re too lazy to go back), you will see that there are only two genuine yoga poses:

Both are very easy to learn. In fact, much of the typical description of the Sphinx is made of filler text about the tongue, brain and belly, and much of a typical description of the Pigeon of details about how you should feel (as opposed to how to get into the pose). Stripped of color commentary, the Pigeon pose is rather straightforward. (WikiHow does not have an introduction to Sphinx, but has one for Cobra (Bhujangasana) which is quite similar.)

If you want to explore yoga further, here’s a short list of three poses that won’t give you much trouble to learn, with tips on how to do them and integrate them into your practice:

So, is yoga for lifters about stretching?

Well, not exactly. It’s mostly about isometrics, but you’ll get some `stretch’ out of it. There’s nothing new about that, really. Generations of gym-goers have co-opted yoga for isometric abdominal exercises, like the Side plank pose (Vasisthasana).

But as I mentioned earlier, free weights shift the lifter’s center of gravity. So, the best side plank for a lifter would be done with a kettlebell as illustrated on the right-hand side. [UPDATE 04/2018. Small picture replaced by a GETUPSWEDEN video.]

Push the idea a little further, and you can really take your yoga practice to the next level. Consider, for instance, the Triangle pose (Utthita Trikonasana). It requires a good amount of flexibility and practice (higher resolution there). 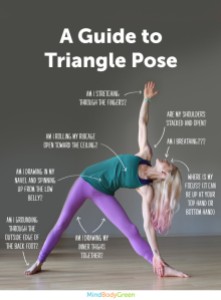 Now, compare with a  kettlebell windmill featured in the header of this post. The weight helps to get into the ‘stretch’ and forces you to uses all kinds of muscles to stabilize the shoulder. Plus, it looks kind of badass.

There is little doubt as to which of the two has the best carry-over to pressing strength. So let’s conclude (provisionally) that yoga for lifters is yoga were you lift.

Published by The Older Avocado

I'm a philosopher, logician, Sherlock Holmes buff, amateur girevik competitor and occasional role-player. I'm husband to a champion and father to a world record holder and I do my best to keep up. Also, I'm fighting Acute Myeloid Leukemia and I still look like I lift. View all posts by The Older Avocado